This post will recommend you a place where U.S President Barack Obama visited in his trip to Vietnam: THE JADE. We just want to introduce a nice place to tourists in Ho Chi Minh City and do not talk about religion aspect.

Built in 1909 in honour of the supreme Taoist god (the Jade Emperor or King of Heaven, Ngoc Hoang), this is one of the most spectacularly atmospheric temples in Ho Chi Minh City, stuffed with statues of phantasmal divinities and grotesque heroes. The pungent smoke of incense (huong) fills the air, obscuring the exquisite woodcarvings. Its roof is encrusted with elaborate tile work, and the temple’s statues, depicting characters from both Buddhist and Taoist lore, are made from reinforced papier mâché.

Worshippers mass before the ineffable Jade Emperor, who presides – draped in luxurious robes and shrouded in a dense fug of incense smoke – over the main sanctuary. He is flanked by his guardians, the Four Big Diamonds (Tu Dai Kim Cuong), so named because they are said to be as hard as diamonds.

Outside, a small pond seethes with turtles, some of which have shells marked with auspicious inscriptions.

Visitors should wear: pants/skirts/dress below knees and no sleeveless.

We hope you will have great time in Ho Chi Minh City and the Jade Emperor Pagoda. 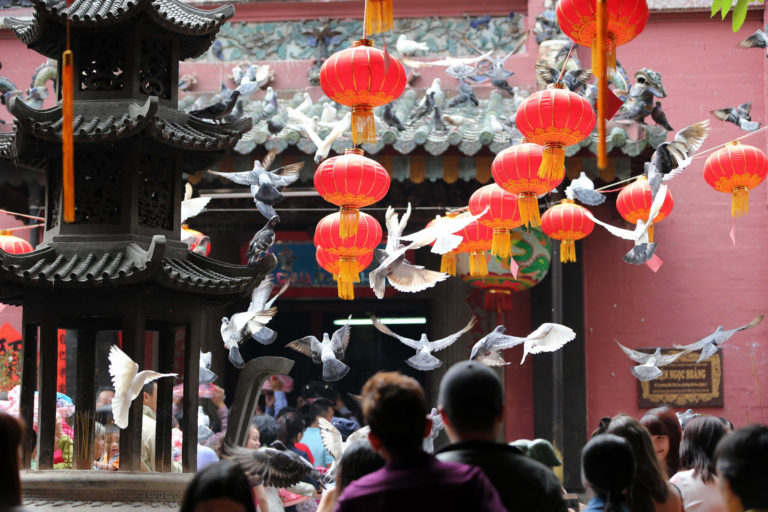